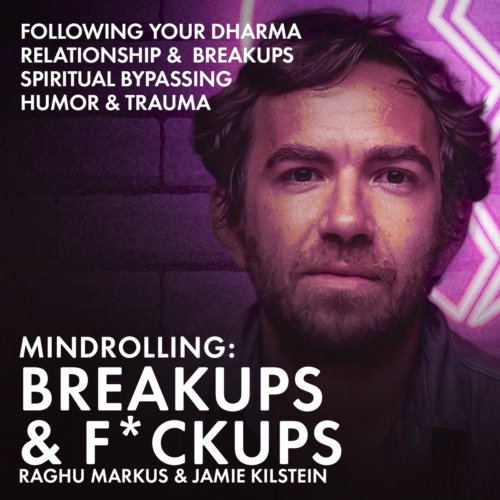 Jamie Kilstein returns with Raghu to talk breaking up, f*cking up, standup comedy, music, following your passions, and being true to yourself.

Jamie Kilstein is a comedian, writer, musician, fighter, and podcaster who hosts, A F*ckup’s Guide to the Universe, where he talks about culture, self-improvement, drugs, mental health, Jiu-Jitsu, spirituality, and being an outcast. He also hosts Jamie made his debut tv appearance on Conan and has been seen on MSNBC’s Up with Chris Hayes, Countdown with Keith Olbermann, Showtime, and BBC America. For more info visit JamieKilstein.com, for more awesome content sign up for his Patreon, and to keep up to date with music and offerings, check out his Instagram and Twitter.

Welcoming returning guest Jamie Kilstein of A F*ckup’s Guide to the Universe podcast, Raghu invites him to share his story of an intense breakup that led him to an impasse of having to choose between staying in the entertainment haven of Austin versus changing up his entire life and living off the land at a farm on Hawaii. From here, they discuss the importance of integrating spirituality into daily life, and how Jamie learned to run towards his art of comedy during difficult times.

“It’s really important to find ways to get zen, to get quiet, to ‘be here now’ with the stuff you love. Whether you are a stay at home mom and dad, whether you are a musician… It would almost be easier to go to a temple for a year and not make mistakes with girls or not drink. But can you do that? Can you still stay kind and not jealous when you’re in Los Angeles?” – Jamie Kilstein

“In a bizarre way, I feel like I’m finding more of myself, and closer to God—or closer to following the right path—doing standup in nightclubs than I was when I was trying to force it on a cushion, or buying new books and half retaining them, or being, ‘I am a spiritual person.’ In a weird way, all of the spirituality, all of these really beautiful present moments I’m having, are coming way more naturally just doing standup or playing music.” – Jamie Kilstein

Raghu talks about Mingyur Rinpoche and his remarkable ability to naturally kindle compassion within his being. From here, Jamie reflects on how good comedy is birthed out of bringing light to trauma and suffering. Next, Jamie speaks about going onto conservative right-wing shows as a liberal because it’s important to talk and laugh with people who disagree with you to help bridge the illusory gap of seperation. To close, they reflect on Ram Dass’ humor, and Jamie shares about his new music project with Oteil Burbridge.

“What you cultivate is what you get.” – Raghu Markus

Johnny Pemberton joins Raghu to discuss comedy as alchemy. on Ep. 427 of Mindrolling