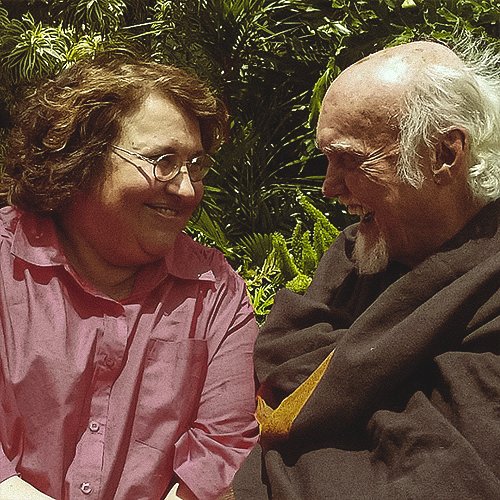 As we crest the anniversary of Ram Dass leaving his body, Sharon Salzberg visits Raghu to share stories about Ram Dass and his amazing capacity to both give and receive love.

“Perhaps no other teacher has sparked the fires of as many spiritual seekers in the West.” Preorder Being Ram Dass & share what Ram Dass means to you.

Journey to India: The Pretense of Accident

With a burning desire to learn how to meditate, but no avenues to due so in school at the University at Buffalo, Sharon levied to create an independent study program which allowed her to go to India to learn meditation from the source of the practice. Key advice from Chogyam Trungpa Rinpoche blessed her departure, which intuitively led Sharon to Goenka’s Vipassana retreat in Bodhgaya where she would first meet Ram Dass and the Maharajji satsang – all by following the ‘pretense of accident.’

“I wrote out the question, ‘I’m leaving for India to learn how to meditate, do you have any suggestions on where to go?’ [Trungpa Rinpoche] pulled my question out, read it out loud, was silent for a moment, and then said, ‘I think you had perhaps best follow the pretense of accident.” – Sharon Salzberg

For a plethora of well curated Ram Dass stories from the life of his friend-and-fellow-teacher, RamDev, on Ep. 42 of Healing at the Edge

Recounting her first encounters with Ram Dass in Bodhgaya, she describes him as a sophisticated, father-like figure to the young, budding satsang. He came with an experience of already having been to India before, already being named by his Guru and introduced into formal sadhana – the spiritual path. Highlighting her next experience with him as the infamous 1974 Naropa sessions in Boulder, she describes Ram Dass’ role in laying the groundwork for the teaching of meditation and mindfulness in the West.

“[Ram Dass] had a very uncanny sensitivity to the human mind, the kinds of trouble we can get into, and the ways we can hold on or cling. I saw it over and over again where he could just slice through. So, for all he talked of love, light, ascending, and the divine; he never seemed to lose touch with the real angst that everyone goes through.” – Sharon Salzberg

Join Ram Dass and Chogyam Trungpa Rinpoche together in a dialogue from the infamous 1974 Naropa University sessions, on Ep. 112 of Here & Now

After telling personal Ram Dass stories filled with rolling humor and deep bhav, Sharon and Raghu transition into the subject of Ram Dass’ stroke, and how it taught Sharon the difference between hope and faith. Recalling Ram Dass’ capacity to be engaged and present at retreats despite his limiting condition, Sharon explores how making friends with suffering and learning to truly receive help can open us to liberation and love.

“He said, after the stroke, receiving help was the hardest thing of all, and it was the most liberating…That ability to actually receive made him so transparent, so that the love was going both ways. There was no more blockage anywhere because he was just made of light and love.” – Sharon Salzberg

For more Ram Dass stories from his friend-and-fellow-teacher, Jack Kornfield, turn the page back one week to Ep. 371 of Mindrolling