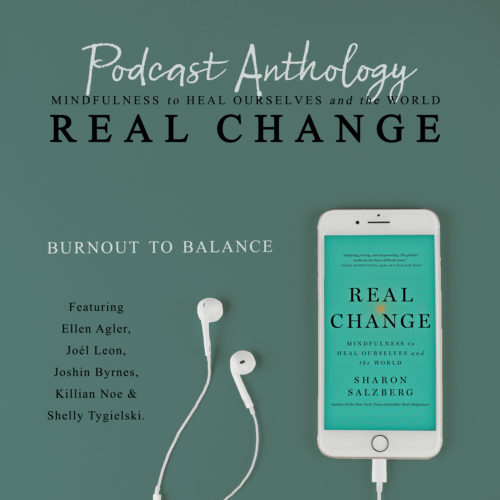 These interviews originally aired in 2019 and 2020, with Sharon speaking to various folks about the intersection of mindfulness and loving kindness practice with social action. For the sixth and final episode of this anthology, we’re exploring the theme of Burnout to Balance. This episode features interview clips with Ellen Agler, Joél Leon, Killian Noe, Sensei Joshin Byrnes and Shelly Tygielski. Each guest shares their own unique tools for cultivating balance and equanimity when dealing with the burnout that often accompanies social action work.

Our first clip is from Episode 137 of the Metta Hour, featuring Killian Noe. It originally aired October 12, 2020. Killian is the Founding Director of Recovery Café, providing a beautiful, safe, drug and alcohol-free space and loving community to anchor Members in the sustained recovery needed to gain and maintain access to housing, social and health services, healthy relationships, education and employment. In this clip, Killian talks about the impact that migrating to zoom during the pandemic has had on her overall well-being, and the role that community plays in her ongoing ability to support others in an ongoing way.

Our next clip is from Episode 128 of the Metta Hour, featuring Sensei Joshin Byrnes. It originally aired April 11th, 2020. Joshin is a Zen priest, teacher, activist, and the founder of the Bread Loaf Mountain Zen Community in Vermont. Joshin maintains a core practice of bearing witness to homelessness and has spent much of his career working for social change nonprofits in the areas of AIDS and HIV prevention, child welfare, and community-based philanthropy. In this clip, Joshin shares about his history of pathological altruism, and how that led to his burnout, and how shifting his motivation helped him to find greater balance once again.

“I was getting lots of admiration from people, ‘Oh, you’re doing such virtuous things in your life.” But I came to realize it was coming from a place of lack inside me, rather than from a place of wholeness. I was trying to fill some kind of bottomless pit of need in myself to be loved. That’s been a hard one because you’re reaffirmed all the time for doing this good stuff. The frenzy of doing good has kept me, at times, from looking deeply into what’s motivating me.” – Sensie Joshin Byrnes

This next clip today is from Episode 130 of the Metta Hour, featuring Joél Leon. It originally aired August 24th, 2020. Joel is a performer, author and storyteller who writes and tells stories for Black people. Born and raised in the Bronx, Joel specializes in moderating and leading conversations surrounding race, masculinity, mental health, creativity and the performing arts, with love at the center of his work and purpose. In the clip, Joel and Sharon discuss being able to hold greater balance of complexity of seeming contradiction, such as the simultaneous experiences of joy and sorrow, and what happens when we don’t limit individuals to any one singular characteristic.

“How do we dismantle the old ways of thinking? Part of that is being able to see there is an opportunity, amidst the trauma and grief, to show up in a way that is most aligned with where we want to go. Not a fixed view of that, either. I can see the despair, pain, and angst, but I also know there’s something that lives outside of that that can be joyous. And I can hold space for both of those things without taking away from the energy that those things bring.” – Joél Leon

Our next clip is from Episode 141 of the Metta Hour, featuring Ellen Agler. It originally aired November 16th, 2020. Ellen serves as the CEO of the END Fund, a private philanthropic initiative working to see an end of the suffering caused by five neglected tropical diseases that affect 1.7 billion of the world’s most impoverished people. Her book, “Under the Big Tree” was released in January of 2019. In this clip, Ellen and Sharon talk about developing a managed ego, and how the spaciousness of equanimity can keep the ego in check for greater long-term balance and success.

“This work in social change is so important and it can be all-consuming because it’s never done. And if you don’t find some tools to have longevity with it—you know these amazing pictures of Angela Davis—I just think, how can you be a lifelong activist and keep making change as you ride these different waves of history and keeping working to bend the arc of justice towards good? There is something about mindfulness practice that creates sustainable social activists.” – Ellen Agler

Our final clip is from Episode 121 of the Metta Hour, featuring Shelly Tygielski. It originally aired May 4th, 2019. Shelly is a mindfulness teacher, author and grassroots community organizer who focuses much of her work supporting underserved communities, community organizations, non-profits, and schools. She is deeply involved in offering trauma-informed healing practices to communities affected by gun violence and mass shootings. Her first book, Sit Down to Rise Up, was released in September of 2020. In this clip, Shelly and Sharon talk about we can continue forward after tremendous loss and grief and how the cultivation of meaning can support our recovery.

“I remember Fred talking about finding a way to go on, to survive, and to contribute to the world, to life. And he said that everyday he looks for meaning, he looks for some sense of meaning.” – Sharon Salzberg 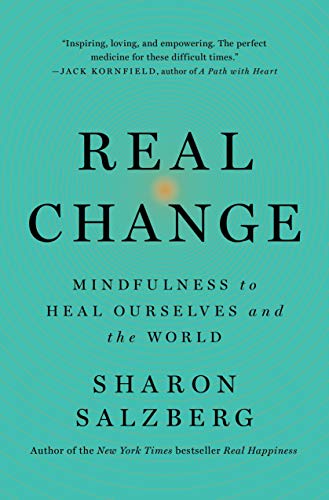