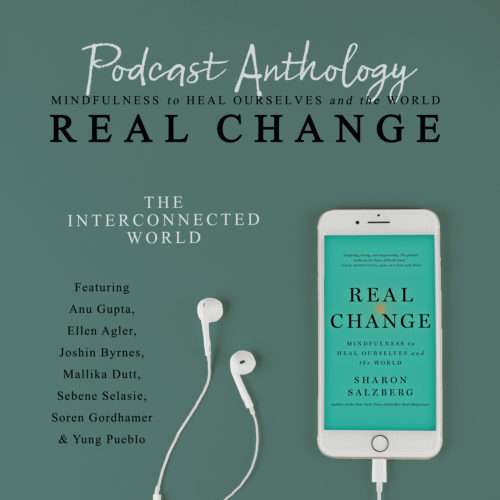 These interviews originally aired on the podcast in 2020, with Sharon speaking to different meditation teachers and activists about the intersection of mindfulness and lovingkindness practice with social action. For the fifth episode of this anthology, we’re exploring the theme of The Interconnected World. This episode features interview clips from Anu Gupta, Ellen Agler, Sensei Joshin Byrnes, Mallika Dutt, Sebene Selassie, Soren Gordhamer and Yung Pueblo. Each guest speaks about the nuanced ways in which interconnection informs their work and their own personal healing.

Our next clip is from episode 140 of the Metta Hour, featuring Mallika Dutt, originally airing November 3rd, 2020. Mallika is a leading innovator in storytelling and culture change, bringing together the power of ancient wisdom and spiritual practices with contemporary technologies and tools for creative connection and transformation. She combines her creative advocacy for a thriving world with a coaching, speaking and strategy practice that connects planet, people, and purpose. In this clip, Mallika shares her journey with Sharon of coming to understand interconnectedness as the basis for both personal and collective healing. They also talk about despair as the opposing state to connection, and how we can begin to work with despair to move towards a more interconnected reality for ourselves.

Our next clip is from Episode 129 of the Metta Hour, featuring Sebene Selassie, originally aired on August 17th, 2020. Sebene has been teaching meditation workshops, courses and retreats for over a decade and her first book, “You Belong” was released in August of 2020 by Harper One. She has studied Buddhism for over 30 years and received a BA from McGill University in Religious and Women’s Studies and an MA from the New School where she focused on cultural studies and race. Sebene has served on the boards of New York Insight Meditation Center, the Barre Center for Buddhist Studies, and Sacred Mountain Sangha. In this clip, Sebene talks about how our sense of self is affected by not feeling part of the larger whole, and how that disconnect can lead to harmful and distorted views of reality.

“Desmond Tutu says, ‘We are because we belong.’ It is the fact-fundamental nature of reality that we are interconnected, we are not separate, we belong to all of nature. But again, our families, culture, history, society, inequities, divisions—they all threaten that sense of belonging.” – Sabene Selassie

Our first clip is from Episode 128 of the Metta Hour, featuring Sensei Joshin Byrnes, originally aired on August 11th, 2020. Joshin is a Zen priest, teacher, activist, and the founder of the Bread Loaf Mountain Zen Community in Vermont. Joshin maintains a core practice of bearing witness to homelessness by offering street retreats in cities around the country and has spent much of his career working for social change nonprofits in the areas of AIDS and HIV prevention, child welfare, and community-based philanthropy. In this clip, Joshin shares how the practice of Zen has helped him to rest into the direct experience of the oneness of life.

Our next clip is from episode 132 of the Metta Hour, featuring Diego Perez (widely known as his pen name Yung Pueblo), originally airing Dec 7th of 2020. Diego is a meditator, writer, and speaker who is widely known on Instagram and various social media networks through his pen name Yung Pueblo. Online he reaches hundreds of thousands of people every month through his written works that focus on the reality of self-healing, the movement from self-love to unconditional love, and the wisdom that comes when we truly work on knowing ourselves. In this clip, Diego reflects on the quality of interconnectedness he experienced living in NYC early in the pandemic, and the perspective that gives him on dignity and basic human rights.

“One of the biggest topics was the healthcare inequality that was happening in the city, where so many black and brown people were getting worse healthcare and treatment in the hospitals, dying in bigger numbers. It made the interconnectedness so clear; in a way where you knew if the people in your community are not healthy, then your chances of being unhealthy also rise.” – Yung Pueblo

Our next clip is from Episode 141 of the Metta Hour, featuring Ellen Agler, originally aired November 16th, 2020. Ellen serves as the CEO of the END Fund, a private philanthropic initiative working to see an end of the suffering caused by five neglected tropical diseases affecting 1.7 billion of the world’s most impoverished people, including more than 1 billion children. The END Fund actively supports programs with dozens of partners in more than 25 countries, focusing on sub-Saharan Africa. Her book, “Under the Big Tree” was released in January of 2019. In this clip, Sharon and Ellen talk about the relationship between systems-level change and individual-level change; how each informs one another, and how to ensure that the whole is great than the sum of the parts. Ellen reflects on the challenges that result from losing perspective for larger systems and vice versa.

“Systems-level work is so interesting and our mutual friend Jeff Walker talks about this—the term: system entrepreneur—that actually there is a way of working in the in-between systems between organizations that’s so important for large-scale change. But then, for me, if I can’t keep in my mind the one person who’s life will be changed, it can get really abstract and demotivating.” – Ellen Agler

This next clip is from episode 133 of the Metta Hour, featuring Anu Gupta, originally airing Sept 14th of 2020. Anu is a scientist, educator and lawyer. He is the Founder of Be More with Anu, a science-backed, compassion-based approach, after conducting decade-long research on the causes of and solutions to racial and gender inequality. In this clip, Sharon and Anu talk about the legacy of John Lewis, Martin Luther King Jr, and Mahatma Gandhi in the movement of nonviolent resistance; and how the truth of interdependency can work as an agency to love our enemies.

“Today, I was watching a memorial for John Lewis, and basically that is what he stood for the entirety of his career, the entirety of his existence, he was able to have love for every single one of those officers that were beating him down, for all of the politicians that opposed everything he stood for on equality and justice. That didn’t mean he agreed with them, that didn’t mean he didn’t oppose them or speak out against them. Of course he did, he was an activist and protester; yet he could still see their humanity.” – Anu Gupta

The next clip is from episode 136 of the Metta Hour, featuring Soren Gordhamer, originally airing Oct 5th 2020. Soren is the founder and host of Wisdom 2.0 and the author of the book by the same name. He has spoken on and taught mindfulness to people around the world–from youth in New York City’s juvenile halls, to trauma workers in Rwanda, to the staff at Google’s corporate headquarters. In this clip, Soren talks with Sharon about the way he feels interconnection can fuel engagement and social action, and in particular around climate change.

In our final clip we once again hear from Mallika Dutt, who started out the episode. In this clip, Mallika shares her hopes for contemplative practitioners to fuel a more interconnected paradigm, and in doing so, transform the broader power structures of our world.

“Wouldn’t it be so incredible if the worlds of contemplative practice brought all of that incredible energy to really fueling and feeding the emergence of an interconnected paradigm where we stepped in with courage to do the self-reflection around the ways in which we may have continued to benefit from and abuse power and privilege, to really step into the healing that we need to do within and across communities?” – Mallika Dutt 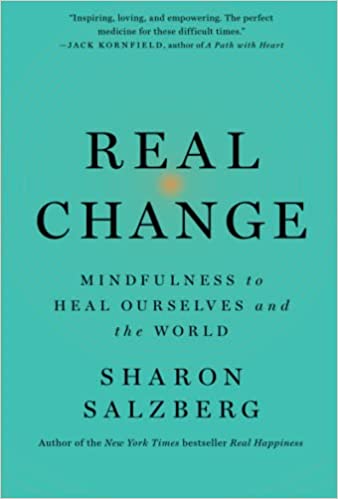