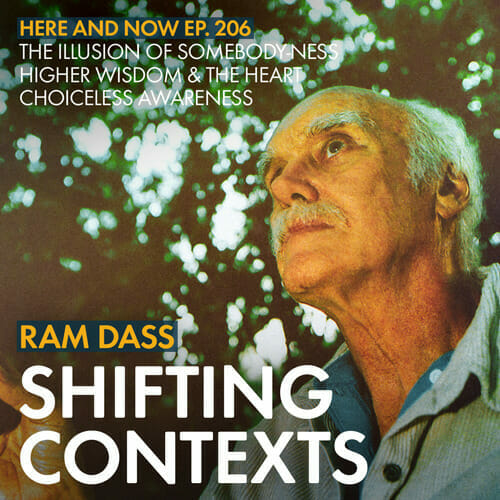 In this dharma talk from the 1990s, Ram Dass speaks about shifting contexts to shift consciousness, cultivating the Witness to curb our reactivity and entering the state known as choiceless awareness.

Want to be part of the discussion about this episode of Here and Now? Join the Ram Dass Fellowship virtual meetup on August 16th at 3 pm EDT.  Sign up for the General Fellowship group to receive more information.

Ram Dass begins with a discussion on the illusion of somebody-ness and the journey to extricate ourselves from the trap of self. He explores how there are processes that use the mind to beat the mind, including exercises such as Zen koans. Using the story of the Bhagavad Gita, Ram Dass shows us how shifting contexts can help us shift our consciousness.

“There’s another way of using the mind to beat the mind through study, through studying systems which slowly modify the system you were working in. You keep shifting contexts for reality.” – Ram Dass

Ram Dass and Alan Watts share some of the essential teachings from the Gita in Here and Now Ep. 195

“So I’m faced with the dilemma of having these two parts of myself: my human heart is doing what it can to relieve your suffering, and my higher wisdom is just watching the whole show. And because that higher wisdom exists, I don’t burn out in the lower part of me.” – Ram Dass

Ram Dass ends with a brief discussion of the more advanced stages of this practice, when we get quiet enough so that the Witness witnesses itself, and we can witness the Witness witnessing. When this happens, we can enter the state known as choiceless awareness.

“And if the mind is disciplined enough, instead of an infinite regression, it flips through and you go into what is called choiceless awareness, which is an altered state of consciousness… It’s like the sky against which the clouds of thought are coming and going. It’s the ground. It’s who you are when you finish being who you think you are. It’s choiceless awareness. It’s presence. It’s the Samadhi state. And then you’re not witnessing anymore, because you’re not knowing it as object, you’re just being everything in absolute quietness. And then out of that comes action.” – Ram Dass