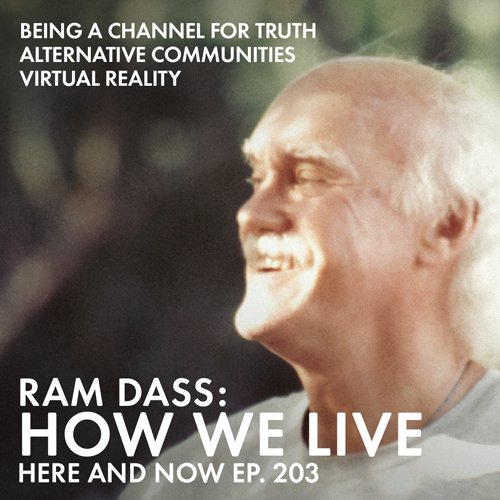 Sending out good vibes on the radio waves once again, Ram Dass takes calls from a live radio audience and answers questions about how he keeps his head straight, the dharmic potential of virtual reality and telecommunications, and more!

This episode is a continuation of the recording from Here and Now Ep. 202. Don’t miss Ram Dass’ conversation with Duncan Campbell, the host of the radio show, “Connections,” on KGNU in Boulder, Colorado.

Back live on the radio, Ram Dass answers a question about how he keeps his head straight amidst being labeled a “channel for truth” and always being asked to give life advice. The next caller asks for Ram Dass’ thoughts on the telecommunications revolution and the Information Superhighway. Ram Dass speaks to the dharmic potential of technologies like virtual reality and digital communication for creating virtual satsang.

“I can feel that what is required is that from moment to moment I stay as quiet in my mind and open as possible to hear the gestalt anew because the whole process is changing so fast. For example, the nature of time, the way in which people understand time, there’s some very profound changes through the Information Age. The implications of that run off and off and off and off and off into an infinite number of permutations.” – Ram Dass

Duncan Campbell, host of “Connections,” asks Ram Dass about his experience with being on television and how he worked to be an active presence in a passive media. Ram Dass talks about compassion and having an appreciation for the mainstream consciousness. The next caller asks Ram Dass for his thoughts on alternative communities, and they engage in a discussion about the challenges of moving away from conventional society.

“I think that alternative communities are potential role models for the game. And I think that they are great experimental situations for us to examine a lot of our ideals when they’re made manifest.” – Ram Dass

Ram Dass talks about the community of the spirit in Here and Now Ep. 188

The show’s final caller asks Ram Dass if he’s ever had the opportunity to speak with Christian clergy about the message they deliver, which the caller feels leads some people astray. Ram Dass talks about his connection with religion, especially Judaism, and how it’s easy to end up as a false prophet in those religious systems.

“You’ve got to see that into Christianity is coming a lot of the new movements in which people are speaking in tongues… that’s all part of a process that’s forcing the Pope to squirm a little bit on his throne and reconsider his position as well.” – Ram Dass