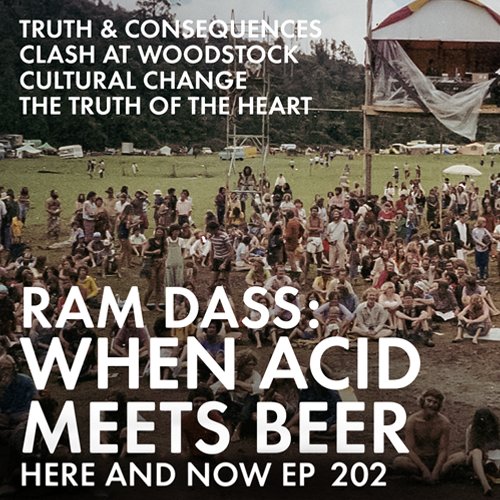 In this recording from 1994, Ram Dass joins Duncan Campell on the radio show “Connections” for a conversation about truth, cultural change, and what happens when acid meets beer.

“Connections” host Duncan Campbell welcomes Ram Dass to the show and fondly recalls first seeing him at Harvard in 1969, which was the first time Ram Dass had returned since being fired. Ram Dass talks about what it was like to get kicked out of Harvard, the power of truth, and why it’s more fun to be a bad guy than a good guy.

“When I got thrown out of Harvard in May of ’63, that was a powerful moment in my life because I was doing what I felt to be true, even though the whole social system was telling me I was wrong.” – Ram Dass

Ram Dass and Duncan reminisce about the innocence and naivete of the ‘60s. Duncan tells a story about a culture clash he saw at Woodstock, which Ram Dass likens to what happens when acid meets beer. Ram Dass gives his take on the state of things from his 1994 viewpoint, talking about how it’s an amazing time for doing the inner work of cultivating equanimity.

“This time around either everybody goes or nobody goes. It’s not enough to polarize again, that’s what we did in the ‘60s. We were the good guys with truth and love, and they were the bad people with fear and contraction. And that’s not good enough anymore, really.” – Ram Dass

The conversation turns to the privileged position of the intellect and what that means in our culture. Ram Dass and Duncan discuss how economic values have become the rock paradigm for society, but that paradigm doesn’t deal with the truth of the human heart. For Ram Dass, our work is to prepare to stay stable in the presence of intense change and chaos.

“I think that Harvard was right to throw me out because I was going on to a tennis court with football cleats.” – Ram Dass