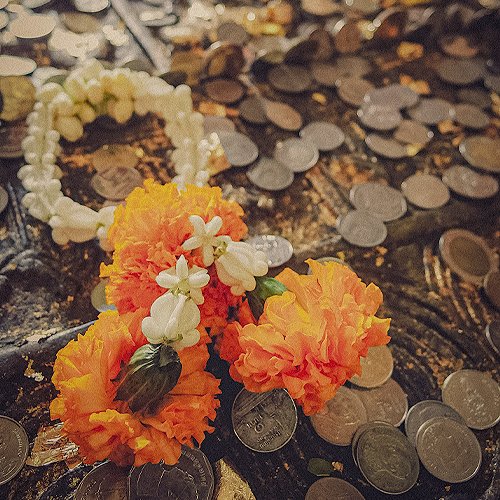 In this recording from 1989, Ram Dass talks about looking through the veil of role and personality in the business world, and offers his unique perspectives on work and money.

The Ram Dass Soul Land Music Series returns on March 19 – join us for a second season of virtual concerts, Q&A sessions, and community! Check out the lineup: Soul Land Lineup

This week’s episode of Here and Now is a recording from a Q&A session in 1989. Ram Dass begins by offering his perspective on how we can bring a spiritual mindset to the workplace by seeing through the veil of role and personality. He talks about answering life’s big questions and how, from a spiritual point of view, we’ll grow from any decision we make.

Ram Dass answers questions about cultivating a healthy approach to money and having blessings bestowed on us by the universe. He explores how the concept of ‘more is better’ is a sickness in our culture, and talks about viewing money from a new perspective. He tells stories of Sai Baba and Ramana Maharshi, which make one wonder who’s really running this show.

“Maharajji said to me once, ‘All the money in the world is mine.’ Now is that total psychosis? Sounds like it, doesn’t it? Or is it? Or is there some other way of understanding money, in which you see it as just this kind of play energy, like Monopoly money? You play with it.” – Ram Dass

David Nichtern and Shep Gordon share a conversation about power and fame on Creativity, Spirituality & Making a Buck Ep. 7

Ram Dass and a young man from the audience have a back-and-forth dialogue about dealing with money from a spiritual point of view, and the trap of feeling like something always needs to be accomplished. Ram Dass talks about the illusion of decision and touches on faith in the spiritual dimension.

“We in the West are always trying to parlay ‘this’ into ‘that,’ but ultimately that is one that keeps feeding the sense of continuity of ego, of somebody going somewhere. So part of it is facing the fact that there’s nothing to do, this whole thing is a complete hype.” – Ram Dass