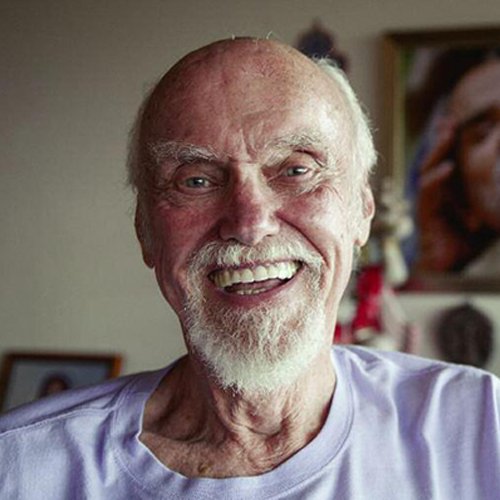 On this special 100th episode of Here and Now, Ram Dass and Raghu Markus talk about imagination, faith, and gratitude. Ram Dass teaches us to see through our own delusions that mislead us and weigh us down with fear.

Ram Dass brings insight to several important questions. How can we learn to trust our intuition without fooling ourselves? Where does gratitude come from? Explore these questions and more on this episode of Here and Now.

Imagination (07:20) – Raghu reads a passage about imagination, which has been a subject Ram Dass has spoken on for decades. Generally, we are taught that imagination is nothing but fantasy and has no place in our real world, yet our imagination is always operating, opening up a limitless world of possibilities.

The Guru Within (10:35) – The spiritual world is created by imagination. When Ram Dass wants to speak to his guru, Maharajji can alway be found there in his imagination. Everpresent, Maharajji opens himself up on that plane of imagination.

Open Through Faith (18:10) – How do we remain spiritually open while being pragmatic and not bullshitting ourselves? Ram Dass thinks it all comes down to faith. We must separate ourselves from our mind trying to bullshit us.

Maharajji, the Mirror (22:15) – “Faith? No fear. Faith no? Fear…” The mirror of the guru was so strong that Raghu and Ram Dass feared that they were unworthy of being in the presence of Maharajji.

Fear is the Ego (26:20) – How does Ram Dass deal with fear and faith? Fear is the ego. Ram Dass gets down to the heart, where his soul tells him the truth that fear tries to hide.

Near Death (32:05) – Raghu shares the story of Mingyur Rinpoche’s near death experience. This experience taught Mingyur to be grateful for something each day that he wakes up. Ram Dass discusses the role of gratitude in his own life.

Be sure to check out Being Here Now, a new audio series from Ram Dass. Being Here Now is an eight-week audio course with a companion guide written by Rameshwar Das.