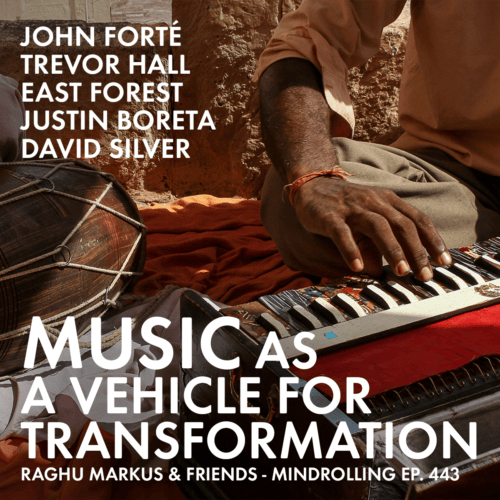 In this specially curated anthology episode of the Mindrolling Podcast, Raghu explores the many ways that music can become a vehicle for spiritual transformation with his musically inspired guests – David Silver, John Forté, Justin Boreta, East Forest & Trevor Hall.

Check out the first episode in the Mindrolling Anthology Series: Science & Spirituality

Music can be a powerful and transformational ally. Raghu and David Silver talk about John Coltrane, Ali Akbar Khan, and Bob Dylan. They chat about the context of music and the cultural zeitgeist in the 1960s. David also spends time talking about his time working with reggae music icon, Bob Marley. We learn about trance-transcendent music, David Silver’s Grateful Dead experience, and how music can be used as a trance tool. Lastly, we listen to music from Asaruf w/ Steve Shehan and Bali Otmani.

“This is an example of the kind of music that, even without understanding the words, seeps inside of your bones. I think one of the best ways to describe this ally is that it is a circular feeling that becomes very trance-like and puts you in a one-pointed place where your discursive thought gets eliminated.” – Raghu Markus

John Forté shares how he first learned the guitar while he was incarcerated and how he was transformed through that experience. He describes how the essence of music (not the music industry) saved his life. John and Raghu discuss music as alchemy and how Ram Dass helped John connect wisdom and music.

“I was able to find this treasure trove of recordings, and I was transported. I closed my eyes, I listened, I laughed along—I was in the room. Me being a musician deeply rooted in the urban experience, I feel duty-bound to take the stuff that makes me feel great, and put it to song so that others can pick up on those good-feeling ingredients. So, I began purposely and deliberately, with a whole lot of love, incorporating this wisdom into the music.” – John Forté

Path of the Heart with Justin Boreta & Rachael Fisher (41:10)

We hear a sample of Boreta’s Imagine Meditation Ram Dass track that started it all. Rachael asks him about music’s connection to meditation. Boreta tells us a Ram Dass story about dispelling the “feedback loop” of music.

“For me, music lines up perfectly with my meditation practice. The funny thing is that even before I had a practice, music served that role for me and I think for a lot of people it is that, whether or not they would call it that. When you listen to music, to really get the essence of it, you have to actually be in the moment. It’s something we create that only exists over a course of time and I think it is actually a framework of mindfulness and present time awareness for people who may or may not have had that sort of training.” – Justin Boreta

East Forest and Raghu talk about how the album “Ram Dass” was conceived. East speaks about the process of opening and surrender that creating the album has been for him.

“The story of this record is that it is Ram Dass today. When people hear the songs, they hear the voice of wisdom that is seeping through. The character of his voice. His words are so masterful.” – East Forest

Raghu and Trevor Hall kick back and listen to samples from specially curated Trevor Hall tracks, live performances, remixes, and a moving kirtan – amidst catching up with Trevor about touring post-pandemic, his new album, and life as a new father. Raghu reads a poem on devotion and then plays a 30-minute chanting session from Trevor Hall.