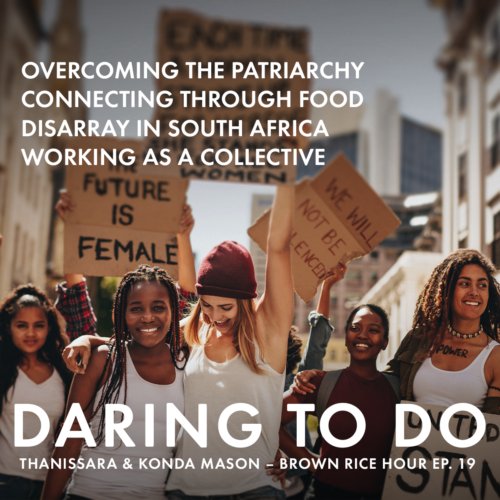 In this Episode of Brown Rice Hour, Konda Mason talks with Thanissara about Buddhist nunhood, the patriarchy, and daring to do.

Thanissara is a teacher, poet, climate activist, and co-founder of the Dharmagiri Sacred Mountain Retreat. She spent 12 years as a Buddhist nun and holds an MA in Core Process Mindfulness-Based Psychotherapy Practice. Thanissara was a founding member of Chithurst and Amaravati Buddhist Monasteries in England. She helped initiate/support a number of HIV/Aids response projects in deep rural South Africa. In addition, she has facilitated meditation retreats internationally for 30 years. She teaches across the U.S., in South Africa, and the UK. She is the author of several books, including her most recent, Time To Stand Up, A Buddhist Manifesto for Our Earth.

After honoring the land and our ancestors, Konda Mason and Thanissara dive into a discussion about food. Konda believes that food can tell a very personal and socio-economic history. It is a window into a very intimate corner of our lives. We learn about Thanissara’s working-class roots and ancestral memories of famine. She discusses how cooking is primal and connective. Thanissara eventually went on to cook for monks in monasteries until she felt that she was playing a role in the patriarchy.

Thanissara discusses her experiences with Ajahn Chah. When she first met him, she was filled with awe. She witnessed him bowing to a statue of Buddha that others had disregarded. She thought that this was a marvelous way to live life, in a constant bow of honor. This moment stayed glued in her heart. Ajahn Chah was the reason Thanissara became a Buddhist nun. He helped her to see her own ignorance. He inspired her to dive deeper into her devotion. Eventually, she left her life as a nun because she saw all of the patriarchial fractures that were present in the Buddhist community. She found her inner voice and feminine strength.

If you are interested in learning more about Ajahn Chah, listen to Jack Kornfield – Ep. 79 – Remembering Ajahn Chah

When Thanissara left her nunhood, she moved to South Africa. Ironically, she witnessed more of the patriarchy here. In addition, she saw immense trauma in the black community, extreme poverty, and general disarray. The was something very difficult for Thanissara to process. The country was going through political upheaval. The privilege of the white community coupled with the suffering of the black community broke her heart. Thanissara held a presence for all. She held open the door for healing and awakening. This period of her life shaped much of her work in activism.

“For me, it became about trying to survive and grow something that was positive and not be destroyed in the process.” – Thanissara

To hear more about incorporating anti-racism into your life, tune into Ep. 21 of Sufi Heart: Anti-Racism As A Spiritual Practice with Simran Jeet Singh

Konda Mason and Thanissara wrap up with a discussion on courage. Thanissara has been an integral force in bringing attention to the dharma of the world. She has fought for the BIPOC community, for rights in South Africa, and for dismantling the patriarchy in Buddhist communities. Konda asks Thanissara how she had the courage to accomplish this. Thanissara shares a phrase Ajahn Chah used: daring to do. We just have to take that first step and dare to do what is right. Thanissara also shares the importance of working as a collective:

“We have to come out of our silos and reach out because it is a dangerous moment that we’re in and we have to remind each other and feel together how we forge that way forward.” –Thanissara