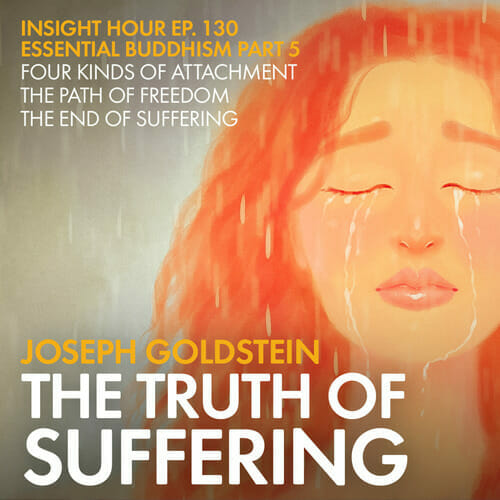 The “Essential Buddhism” series continues with this 1974 dharma talk focused on the Four Noble Truths and how we must face the truth of suffering to walk the path of freedom.

This dharma talk from the Naropa Institute Summer Sessions in 1974 was originally published on Dharma Seed.

The Truth of Suffering

Joseph dives into a discussion of the first of the Four Noble Truths, the truth of suffering. He talks about how there is suffering all over the world, but we create a lot of diversions to keep ourselves from seeing it. There is an inherent painfulness in the very nature of existence, and we don’t want to face it.

“There are planes of existence which are filled with even much greater suffering, which arise as the result of our own unwholesome deeds. We create for ourselves the hell worlds and the hungry ghost realms and all the lower worlds of suffering. They’re not created by any divine being who casts people down into them, they are created by our own states of mind, our own unwholesome mind.” – Joseph Goldstein

“If there is an ‘I,’ there is an ‘other,’ there is division, there is separation. There is threatening and defensiveness. There is anger and desire, possessiveness, attachment, all for the well-being of this non-existent self. Self is a concept only, but a concept which is so deeply engrained, a concept with which we are so heavily conditioned to believe in, this concept of ‘I,’ that it keeps us very bound to the Wheel of Samsara, to the wheel of suffering.” – Joseph Goldstein

Jack Kornfield dives deeper into the concept of attachment in Heart Wisdom Ep. 44

Fortunately for us, the Buddha didn’t stop after the first two truths. Joseph talks about the Third and Fourth Noble Truths, the truth of the cessation of suffering and the truth of the Way, the path that leads to the end of suffering. He ends with a discussion of the different motivations people have to walk this path, including the motivations of the Buddha himself.

“The end of the path is freedom. It’s open to all of us. All we have to do is begin the journey, to be facing towards the light. And some people will progress slowly, and some people will progress quickly, and it does not matter as long as we’re going in the direction of enlightenment and freedom and peace, and that very much depends upon our own effort.” – Joseph Goldstein