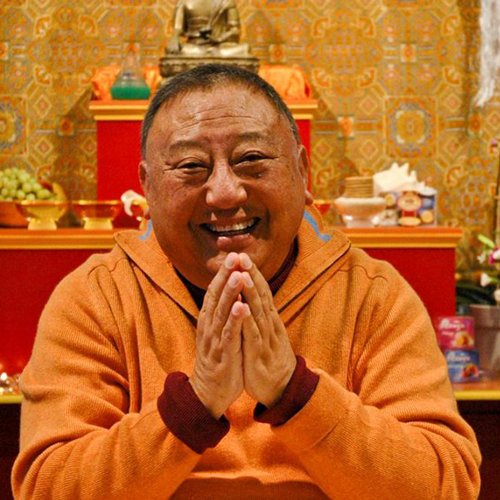 Born in Lhasa, Tibet, in 1939, Kyabje Gelek Rimpoche was recognized as an incarnate lama at the age of four. Strictly tutored from an early age by some of Tibet’s greatest living masters, Gelek Rimpoche gained renown for his powers of memory, intellectual judgment, and penetrating insight. As a small child, Gelek Rimpoche lived in a simple monk’s cell in a country with no electricity or running water and little news of the outside world. A bright and curious child, he scoured the pictures of torn copies of Life Magazine for anything he could gather about America. This exposure drove Gelek Rimpoche to bring his life experience and wisdom to both the east and the west.

Among the last generation of lamas educated in Drepung Monastery before the Communist Chinese invasion of Tibet, Rimpoche was forced to flee to India in 1959. He later edited and printed over 170 volumes of rare Tibetan manuscripts that would have otherwise been lost to humanity.

Gelek Rimpoche’s contribution to the preservation of authentic and seminal Tibetan Buddhist teachings within the Gelugpa tradition, for both present and future generations, cannot be underestimated. Rimpoche was also instrumental in forming organizations that would share the great wisdom of Tibet with the outside world. In this and other ways, he has played a crucial role in the survival of Tibetan Buddhism.

Gelek Rimpoche was director of Tibet House in Delhi, India and a radio host at All India Radio. He conducted over 1000 interviews in compiling an oral history of the fall of Tibet to the Communist Chinese. In the late 1970’s Rimpoche was directed to teach Western students by his teachers, the Senior and Junior Masters to His Holiness the Dalai Lama. Since that time he taught Buddhist practitioners around the world.

In noting his passing, Roshi Joan Halifax offered this tribute, surely among the first of many to come:

“Beloved Gelek Rimpoche has gone beyond……..

With his passing, we remember that life is so fragile, so brief.

We have little time to awaken in perfect unselfishness.

Rimpoche gave so much to so many.

He is an inspiration for all of us.

We must remember his way, his great teachings on bodhicitta.

but his great heart will never leave us.”

More than a teacher, Gelek Rimpoche was a beacon of compassion and refuge; a light gone out, but only for a moment.

In August of 2015, Raghu Markus had David Silver were fortunate to spend time with Gelek Rimpoche. Check out their conversation on Mindrolling about Rimpoche’s treacherous escape from his homeland and experiences in the West.

Information for this article and its image were sourced from Jewel Heart, Rimpoche’s spiritual, cultural, and humanitarian organization.