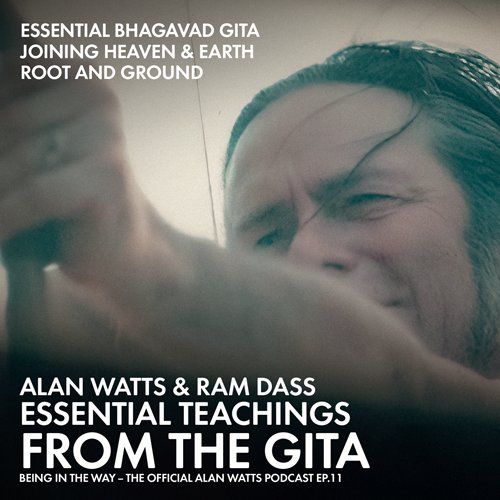 Ram Dass joins Alan for a look at the tools that the Bhagavad Gita offers us to face life’s most difficult challenges.

This episode begins with a recording of Ram Dass from his 1974 Naropa University course entitled, ‘Yogas of the Bhagavad Gita.’ He talks about how the Gita is a vehicle for becoming conscious, and how he understands that teaching this course is working on himself. Ram Dass suggests different ways of reading the Gita and offers a few words about the application of the Gita in everyday life.

“At a symbolic level, what the Gita is, is a dialogue between God and the seeker. And the battlefield turns out to be the inner battlefield, the battlefield of our own evolutionary being.” – Ram Dass

Essential Teachings from the Gita (14:15)

The next part of this episode is a recording from one of Alan Watts’ early radio talks. Alan begins with a general introduction of the Bhagavad Gita and reads a selection from the first chapter. He talks about the concept of Brahman and how it relates to the essential teachings of the Gita. Alan digs into the doctrine of rebirth and how the idea of reincarnation is often misunderstood in the West.

“The essential teaching which the Gita is trying to convey is that the real center and soul, the basic reality of you and I, is not the superficial consciousness which we ordinarily call, ‘myself.’ What we are, fundamentally, is this unthinkable source of life and existence named Brahman, the expansive.” – Alan Watts

Alan continues his talk by reading more passages from the Bhagavad Gita. He explores the story, which takes place on a battlefield, in relation to Gandhi and the concept of non-violence. He talks about Krishna’s principle of action, which is to act without any attachments to the fruits of action. Alan wraps things up by talking about why a free being must be an unmotivated being.

Jack Kornfield talks about what it means to have the heart of an impeccable warrior in Heart Wisdom Ep. 131