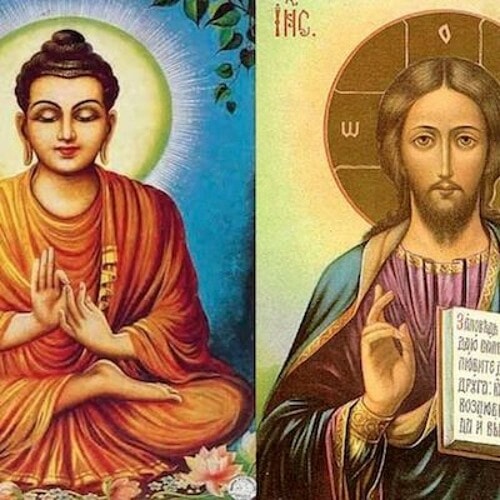 Mindrollers and friends in Manhattan, with a far-ranging conversation about the incredible scrolls of St. Issa in Tibet and India

Maharaji telling the Westerners to meditate like Christ; the dismissal of mysticism by modern organized religion; David being accused of black magic by Evangelicals, Raghu being dragged into a “men’s group”; tales of sixties Rajneesh followers copulating in the kitchen…and finally, a Shambala Sun inspired rap on the task of making friends with yourself. Somehow, we end with an anecdote around the amazing Kalu Rinpoche. It’s all in there and quite a bit more…

In 1894 Nicolas Notovitch published a book called The Unknown Life of Christ. He was a Russian doctor who journeyed extensively throughout Afghanistan, India, and Tibet. Notovitch journeyed through the lovely passes of Bolan, over the Punjab, down into the arid rocky land of Ladak, and into the majestic Vale of Kashmir of the Himalayas. During one of his jouneys he was visiting Leh, the capital of Ladak, near where the buddhist convent Himis is. He had an accident that resulted in his leg being broken. This gave him the unscheduled opportunity to stay awhile at the Himis convent.

Notovitch learned, while he was there, that there existed ancient records of the life of Jesus Christ. In the course of his visit at the great convent, he located a Tibetan translation of the legend and carefully noted in his carnet de voyage over two hundred verses from the curious document known as “The Life of St. Issa.