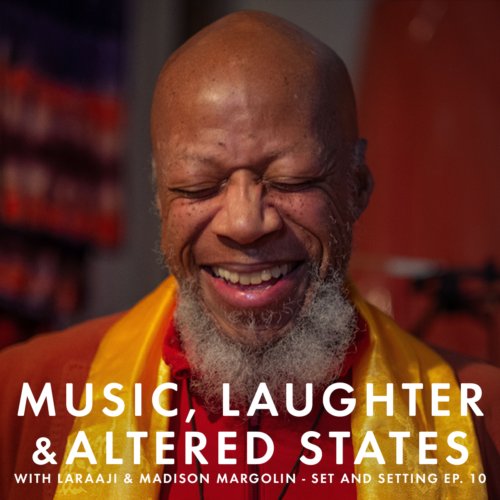 Madison Margolin sits down with Laraaji for a discussion on music, laughter, and altered states. They discuss the beauty of being in the flow and how cannabis and psychedelics can help us in creative explorations.

Laraaji is a multi-instrumentalist, composer, recording artist, and therapeutic-laughter teacher from Harlem, NY. He attended Howard University to study music and continues to perform in his visionary, blissful style.

This episode begins with Laraaji describing his upbringing. He was raised as a Baptist and found inspiration in the image of Christ. He saw Christ as being beautiful because he was so close to God, which motivated him to become close to the creator also. Eventually, he began exploring meditation and eastern philosophy. This spiritual awakening, coupled with drug experimentation, opened him up to a new world as an artist. It allowed him to have access to a deeper imagination and a deeper connection to the universe.

“That experience opened up my quest for a musical form, a musical expression that would embrace the present moment and the unity of the universe”. – Laaraji

The Relationship Between Music and Laughter (12:05)

Laraaji noticed how therapeutic music was when witnessing the trance-like state of his audience. He recognized that music has the power to transport people much like meditation or yoga. Similarly, laughter can play a part in relaxing the nervous system and releasing tension in order to get into a meditative state. There is a sense of playfulness that is found in both music and laughter. This playfulness prepares us to let go of any resistance and simply explore a sensation.

“The musical creativity contains more positivity, brightness, playfulness, bounciness, daringness, the courage to explore, as a result of the laughter release work”. –Laaraji

If you are interested in learning more about listening as a type of meditation tune into: Melanie Moser – Shakti Hour – Ep. 2 – Sound Therapy with Sara Auster

For some, cannabis use can help with present moment awareness. This can kick-start our meditative states, give us an appreciation for things we may otherwise be unaware of, and deepen our creativity. Laaraji describes how meditation relaxed him and brought him into present time, but cannabis was like a warm ceremony or ritual that heightened this experience of being present. It helped him to improvise when playing music and led him to creating spontaneously recorded improv music.

For info on psychedelics and music join us for another episode of Set and Setting: Music is the Gateway w/ Justin Boreta

Madison inquires about Laraaji’s psychedelic experiences beyond cannabis. They discuss how psychedelics can fast track you to a religious experience. This can be much more potent than reading about religion in a bible or attending church since you are directly experiencing something magical and profound. Have you had a direct religious experience, with or without the aid of psychedelics?

Check out The Wire’s recent cover feature of Laraaji