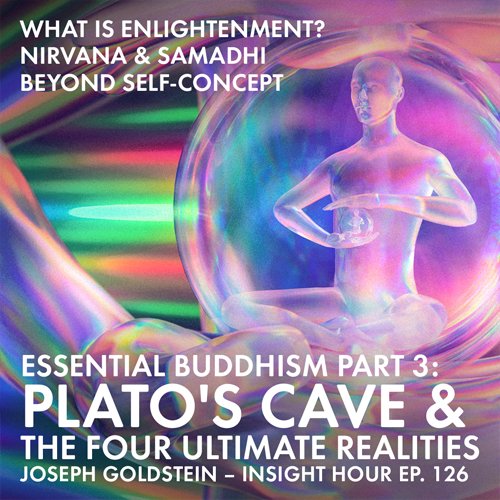 The Insight Hour podcast’s “Essential Buddhism” series returns with lessons we can learn from the parable of Plato’s Cave and the Buddhist teachings on the Four Ultimate Realities.

Continuing a series of vintage lectures stemming from the infamous Naropa Institute Summer Sessions, this Dharma Talk from July 23rd, 1974 has Joseph Goldstein using the parable of Plato’s Cave to help illuminate the Four Ultimate Realities outlined in Buddhism.

This dharma talk from Joseph was originally published on Dharma Seed

Opening by sharing Plato’s Parable of the Cave, Joseph welcomes the audience into the clear view of how concepts often rule our life instead of reality. Looking into concepts like places, nationalism, time, past, future, ownership, gender, and self—Joseph helps us see beyond them from the open lucidity of the boundless present moment.

Catch the first part of this series: Essential Buddhism Part 1: Developing Our Field of Awareness

“When you see something, you are not seeing man, or woman, or tree, or sky, or house—what is being seen is color. Everything else is a concept which results from a certain mental thought process. The fact of the experience is the seeing of color.” – Joseph Goldstein

From here, Joseph opens the floor to audience questions. Unwinding misconceptions around enlightenment, he shares how no-self means there’s nothing to be annihilated. Moving past concepts and all which arises and passes, Joseph points to the truth of nirvana which underlies it all, before sharing the on nuances of samadhi.

“People sometimes get involved in the misconception that enlightenment is annihilation—enlightenment is the end, ‘I’ no longer exist. There is nothing in the first place to be annihilated. There is no self which is going to be destroyed – that is the big illusion. The whole process of meditation is to see that there is no one here.” – Joseph Goldstein

Joseph Goldstein applies the metaphor of a river to our concept of self, on Ep. 119 of the Insight Hour