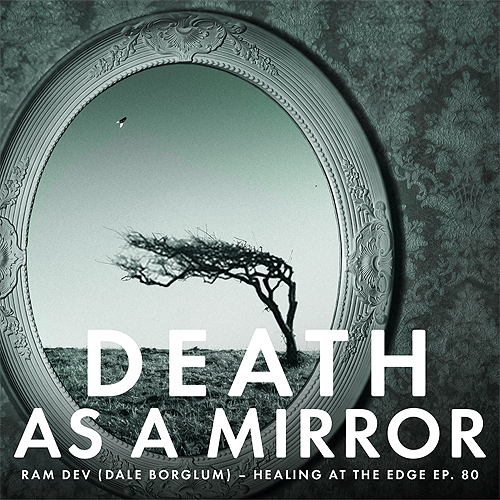 This time on Healing at the Edge, Ram Dev discusses dying. We learn how we can see death as a mirror and how to cope with the bittersweetness of life.

Ram Dev begins by discussing his friend Jackie and her recent death. He describes the moral ambiguity that he felt towards the process of assisted suicide. While his dear friend was very ill, he had difficulty being comfortable with her choice. He decided to be present with her for her earthly exit because she had a lot of fear and needed him there. Being there for a beloved who needs you is a powerful act of compassion, especially when you must let go of your own feelings or connotations.

“Perhaps the deepest reason that we are afraid of death is we don’t know who we are.” – Ram Dev

For more on this subject of death, tune into this Ram Dass talk: Love Transcends Death

Living is inevitably bittersweet. We lose people we care about, we suffer, and we watch others suffer. However, just because life ends does not mean things are not beautiful. In the end, there is often a pattern of resistance to death. People have doubts about whether or not they lived life in the correct way. They wonder if they experienced enough beauty, if they were devout enough, and if they were good enough. In short, they start to fixate on their perceived imperfections instead of accepting their humanity. This is a normal part of grief. Ram Dev shares a token of wisdom on these resistances:

“The problem with trying to be spiritual is that we often forget that being human there is going to be grief. It’s not that we’re going to go beyond it. There will always be grief. There will always be longing. It’s the longing itself; the journey is the goal. There is not some enlightened state where all of that poignancy, all of the bittersweetness, goes away”. – Ram Dev

After Ram Dev leads us through a guided meditation, an opportunity for discussion is opened. The first question that comes up is about psychedelics. Do people who use psychedelics have greater acceptance of death? Ram Dev believes that psychedelics do help people learn to let go of control, but that any type of practice in letting go will help us accept impermanence. He says:

“Anything you can do to be comfortable in letting go of control, of letting go of that sense of aggression that comes from needing to survive, will help cut through fear of death.” – Ram Dev

If you feel like you are drowning in the world and are fighting to survive, the end may feel similar. Ram Dev says the more we can open our hearts, grow our self-esteem, and accept reality, the better we fare when it is our time to exit. We must work with fear, guilt, and shame while we can so that the urge to resist can fall away. We need to remove our aggression and surrender to the grace that is available to us all.

If you want to learn more about death and the concept of impermanence check out Ep. 134 of Heart Wisdom: On Death