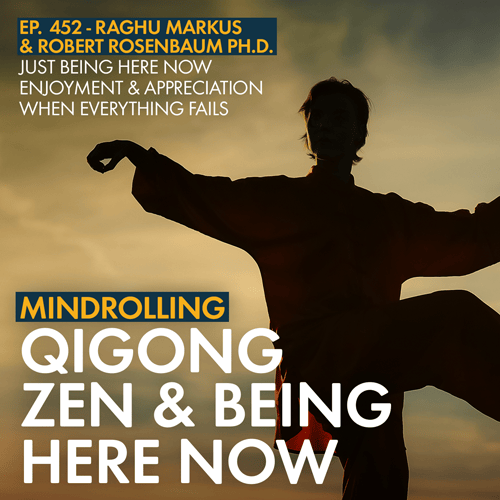 Robert Rosenbaum, Ph.D. is a clinical neuropsychologist and psychotherapist in the San Francisco Bay area, a Zen practice leader and senior teacher of Dayan Qigong, and a mountaineer. He brings a lifetime of practice to the moment-by-moment harmonization of body, mind, and spirit. Check out his amazing new book, That Is Not Your Mind!: Zen Reflections on the Surangama Sutra

Robert Rosenbaum Ph.D. joins Raghu for a conversation around how Be Here Now, Qigong, Taoism, and Zen helped inform his life on the spiritual path, transforming him from a rigid practitioner focused on intense practice, and instead into a flowing individual in the spirt who is focused on presence, enjoyment, and appreciation. Through this lens, Raghu talks about Maharaj-ji’s simple instructions to feed people, love people, and serve people.

Raghu & RamDev “wing it” in an India & Maharaj-ji steeped chat, on Ep. 414 of Mindrolling

Robert shares a story with Raghu about his time in Nepal, and the hilarious and potent lesson he learned about meditation from the act of consistently bumping his head on the doorsill after the sessions. Next, he explores how in this transient world of senses and sense object, everything will fail you at some point—so when everything fails you, what do you turn to? From here, they get into talk on Qigong, awareness, and letting go.

“There’s nothing in this sensory world that can be grasped, there’s nothing you can absolutely rely on except things being exactly as they are. In the Surangama Sutra they say, ‘Whatever practice you’re doing, stop doing that practice and just go to the enlightened basis of that practice.’ To which my friends say, ‘Yeah, well, how do you do that?’ That’s the question: When everything fails you, where are you? What do you go to?” – Robert Rosenbaum, Ph.D.

What happens when a mirror faces a mirror? Peering through this heady lens, Robert and Raghu discuss the clear mirror of reality, and what we can learn through looking in another’s eyes. From here, they explore the complimentary connection between Qigong and Zen. Then, they share on the importance of truth, discuss sex and spirituality, and explore more themes from Robert’s new book, That Is Not Your Mind!: Zen Reflections on the Surangama Sutra