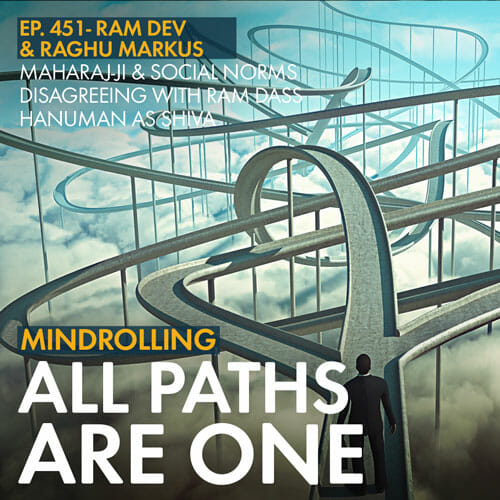 RamDev returns with Raghu to discuss Maharaj-ji as a Satguru, disagreeing with Ram Dass, honesty, Chögyam Trungpa Rinpoche, and if sake can be spiritual.

RamDev founded and directed the Hanuman Foundation Dying Center in Santa Fe, New Mexico, the first residential facility in the United States to support conscious dying. He has been the Executive Director of the Living/Dying Project in Santa Fe and since 1986 in the San Francisco Bay Area. He is the co­author with Ram Dass, Daniel Goleman and Dwarka Bonner of Journey of Awakening: A Meditator’s Guidebook, Bantam Books and has taught meditation since 1974. Dale lectures and gives workshops on the topics of meditation, healing, spiritual support for those with life ­threatening illness, and on caregiving as spiritual practice. Learn more about RamDev’s work via the Living/Dying Project, tune into his Thursdays with RamDev on Instagram, and subscribe to Dale’s Healing at the Edge

Healing at the Edge podcast host and old friend, RamDev (Dale Borglum), rejoins Raghu for a talk tapping into Maharaj-ji, Chögyam Trungpa Rinpoche, and Ram Dass. To begin, Raghu shares a social-norm dissolving story of being at Dada Mukerjee’s house with Maharaj-ji. From here, they discuss how RamDev’s Living/Dying Project had its roots watered by Ram Dass and Stephen Levine. Next, reflecting on how he doesn’t always agree with Ram Dass, RamDev shares a story around cannabis and lecturing.

“In Dada Mukerjee’s house in Allahabad, a very proper Hindu woman saw us—all of these hippies all over the place—everybody together, no decorum whatsoever. She said, ‘Maharaj-ji, the women should be on one side and the men on the other.’ And Maharaj-ji said, ‘It’s okay, Ma. They’re from the west, they don’t know anything, leave them alone.'” – Raghu Markus

RamDev unfolds a collection of Ram Dass’ pivotal teachings, on Ep. 43 of Healing at the Edge

After sharing insight from longtime friend and Buddhist scholar, Dr. Robert Thurman, on the notion of the ‘real guru’ as ‘your own intelligence,’ Raghu invites RamDev to speak about how we can relate to guru on various levels of being—all the way from spiritual friend to the core essence of our being. Through this lens, they discuss the uniqueness of Maharaj-ji as a Satguru who helped congeal together all spiritual lineages and paths.

“Maharaj-ji didn’t have one path – he was all paths.” – RamDev (Dale Borglum)

Raghu & RamDev “wing it” in an India & Maharaj-ji steeped chat, on Ep. 414 of Mindrolling

Flowing the conversation into the wisdom stream of Chögyam Trungpa Rinpoche, Raghu and RamDev talk about life, death, ego, and deception; before RamDev recalls an enlightening sake-forward lecture Rinpoche gave at Naropa which helped him contemplate ‘alcohol, sex, partying, and doing what you want in relation to spirituality. Next, they dive into Ram Dass’ raw honesty and authenticity. To close, RamDev explores Hanuman as Shiva, as well as a tender loving monkey.

“When we were with Maharaj-ji, Ram Dass more than anybody would bring his doubt and his fears to Maharaj-ji. He’d come right up and say, ‘I’m angry at people.’ Hardly anybody else did that—they tried to be the good devotee, but Ram Dass just let it hang out. It was such a great teaching because Maharaj-ji always just kept showering love.” – RamDev (Dale Borglum)