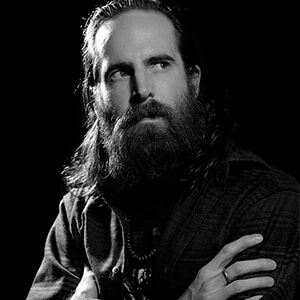 Liam is a world-renowned musician, a not-so-famous writer, rookie father, and avid psychonaut; most well known for his long-term tenure playing bass with the Dillinger Escape Plan. His other interests include traveling, yoga, meditation and most topics that fall under the umbrella of “mindfulness.” Liam lives in Philadelphia.

• Religious Over/Undertones – Liam discusses being raised Roman Catholic, his early interest in self exploration, séances, heavy metal, hardcore, Krishna Core and how all of these factors (and more) contributed to his own yoga and meditation practice years later.

• Punk/Hardcore/Drone/Metal and Yoga – Liam and I discuss punk rockers from Fugazi, 108, Youth of Today/Shelter, Teenage Bottlerocket who are involved in yoga, drone and metal yoga studios and more.

• You Don’t Really Need The Ten Commandments – Liam and I discuss spirituality and waking up, being comfortable with our own personal emptiness, our relationship with life and death and the rabbit hole-ness of this whole topic.

• Something Bigger – Liam discusses his experience with psychedelics and how his use of them transformed from an artistic expression to a spiritual one over time. We also discuss addiction/recovery and both the danger and benefit psychedelics can play.

• Village Vibe –Liam talks about becoming a new father and how it’s impacted his life, creating a much deeper relationship with his family, his friends, his band and the village vibe it’s subsequently created. We also discuss the cumulative effort of generations of DNA splicing and blending and the general biology that’s involved in human evolution and more.

• Living The Dream – I fanboy out a little over Liam’s band, The Dillinger Escape Plan, who I’ve been a big fan of since the 90’s and get Liam to talk a bit about some of the highlights of his career with them including, but not limited to opening a number of shows for NIN & Soundgarden, covering the classic Public Enemy song Fight The Power w/Chuck D, Mike Patton (Faith No More, Mr. Bungle, Fantomas) doing vocals for their Irony Is A Dead Scene ep, playing Pantera’s last show in Japan, performing on Conan and more!

• Music As A Guru – Liam discusses how his bass playing reflects himself back on himself in a spiritual context while playing, both the good and the bad. He also talks about his bass as his weapon in relation to Joseph Campbell’s Hero’s Journey and slaying the dragons that stand in the way of coming back to his truest self, sound meditations, psychedelic’s and music and more.

The Dillinger Escape Plan – One of Us Is the Killer

The Dillinger Escape Plan – Irony Is a Dead Scene

Food of the Gods: The Search for the Original Tree of Knowledge A Radical History of Plants, Drugs, and Human Evolution – Terence McKenna

The World Is Sound: Nada Brahma: Music and the Landscape of Consciousness by Joachim-Ernst Berendt

Neurosis – Through Silver in Blood